We should begin this book with this chapter, but to begin with it means to lose some part of readers, it is a tough stuff. Therefore, it was hidden far away from the beginning. We promise that there will not be so tough texts in this book any more.

Here is one of the submission rituals, most popular among primacies.
“I saw once in the Berlin Zoo as two strong old male-hamadryads for some moment were locked in a serious fight. In a second one of them fled, and the winner pursued him untill at last he was not forced into the corner, and the defeated male had nothing to do, except using submissiveness gesture. In the response, the winner immediately turned away and walked away proudly, on the straight paws.
Then the defeated, squalling, came up with him and started importunately pursuing him with his moved up ass until the strongest male did not “took into consideration” his submissiveness: quite bored-looking he saddled the other male and made some careless intromittent movements. Only after that the defeated male came down, obviously convinced that his mutiny was forgiven”. Konrad Lorenz "Aggression"
V.R. Dolnik in his article "Is life a gender solution or gender - a life solution?" shows a picture and writes that “people also use this posture, but it is not accepted in a well-bred society now and substituted for others”. 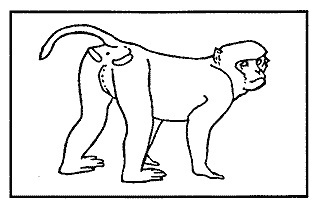 V.R. Dolnik did not show the hardest model - with the second (dominant) male and intromittent movements, but it is presented in a film Magia Nuda (Mondo Magic) 1975 at the festival of a rather culturally-developed African tribe. 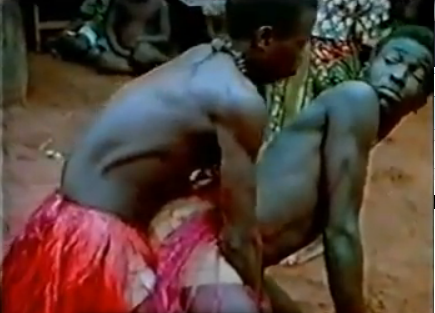 It is not sex, it is public demonstration of hierarchy. Who is who. It was impossible to avoid; the child who understood that there was nothing good for him there, and tried to hide, was caught and immediately pointed, where his place was. 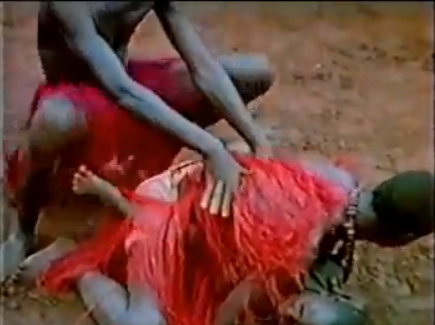 And it was not punishment for escape as directors of the film tried to represent. Judging by the same procedure with the second child, it was a measure of pedagogical precaution, it helped to extinguish future mutinies of inevitably growing boys beforehand. 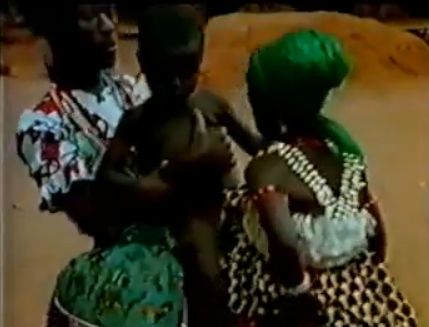 The measure is not excessive. There are evidences on massacre of the senior men in the 19th century in the Caucasus and in the 19th century in Africa. In more humane cases the seniors are forced to go through a status demotion ceremony, and they have to wear female skirts till the end of their life.
This tribe has already passed through all that, they have become wiser, and the future men are forced in the subordinated position since their childhood. The technology is effective enough in view of equality of the symbol and the action. So in the Russian prison I order to lower a convict in the rank of abused it is not always necessary to rape him, a symbolical ritual is quite enough, - and the person will never be able to change his new status.

THE TEMPLARS’ CASE
The Templars were up to the ears in sodomy, but was it sodomy? Here Ann Gilmore-Brayson from the University of Melbourne writes in her work “The Templars and sodomy”. 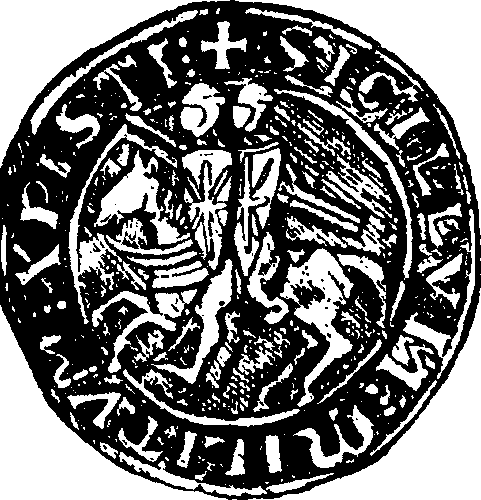 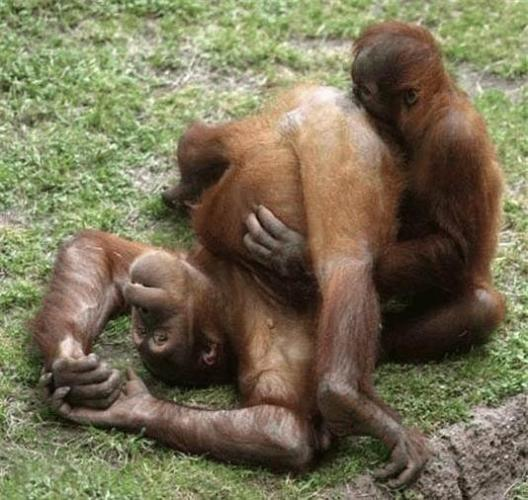 Or so. The quality is low, but in the film we can clearly see that the subordinated male sucks the wooden imitation of the chief’s penis. What were the Templars charged with? – “kisses of the penis”? 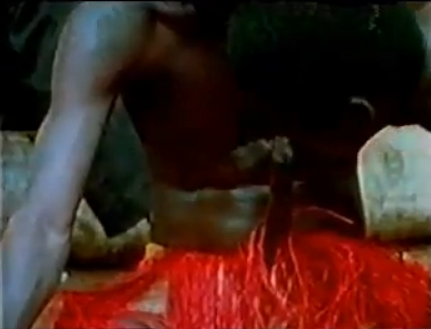 By the way, individuals with a low status do not feel any pleasure at all to take part in this ceremony. 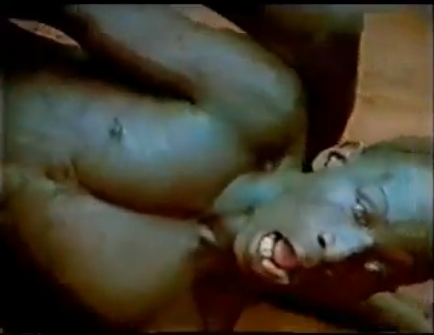 Here is a suitable evidence from the litigation over the Templars:
“The lay brother Stefan declared … that Brother Pavel had desire “to deprave and profane him with this vicious sin, … sodomy …, however his hatred to this vice was so strong that he struck Pavel in the chin, having broken three teeth and having shattered his inferior jow”.
It is very likely that Brother Stefan was reprimanded by the church bosses not because he preferred women, but for that Brother Pavel was more senior in rank, and got beat contrary to the rules. Not without reason “Some historians as, for example, Gershon Legman, are convinced that the Templars practiced homosexual relations though are not assured concerning the causes of these obscene acts …” (Ann Gilmore-Brayson)
It is necessary to tell that the Order of Knights Templars was not an exception, and it was run according to those rules that the society professed.

HOMAGE AS A DOMINATION RITUAL
Homage was the main legal principle of feudalism. But let’s give a definition at first.
HOMAGE [фр. hommage, from homme - person, in the meaning as vassal] – a special symbolical ceremony in the Western Europe of the Middle Ages which completed the conclusion of the vassal contract.
HOMAGE is putting of the folded hands of a vassal in the hands of the seigneur followed by a kiss on the lips.
Traditionally, palms were put together by the obeyed captives or prisoners, stretching hands forward to the winner for rope binding. In religious tradition it means full submission to the Lord in the Highest.
However, it seems, that originally this ritual meant embrace. “Embracing reminds the putting of hands of the vassal in the hands of the seigneur. It expressed symbolical acceptance “in himself”, in the circle of the wards, in “familia”. Yes, indeed, that "surname" that is so clearly observed on Corsica under the name “Cosa Nostra”. In their circle, the kiss means the signature.
So homage looks like on a stage below feudalism: 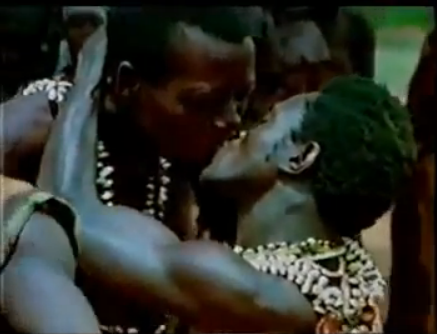 And so homage looks like two steps above feudalism. The seigneur kisses the vassal, and he, even if he has hetero orientation, does not dare to resist "paternal" love. Because his rank is lower. 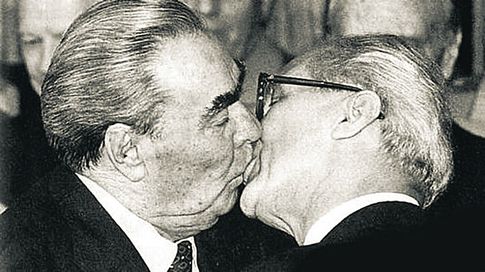 And here we see Cosa Nostra. 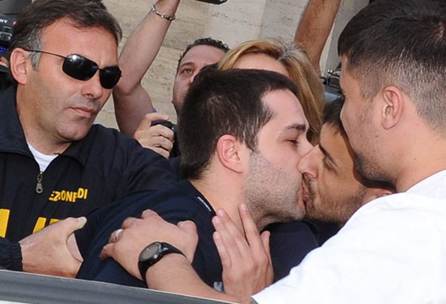 Once it was a submission symbol, - as in Africa right now. 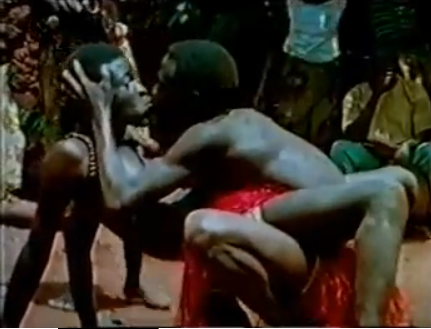 Nowadays the kiss of two men has got a lot of values - from “a death kiss” to harmless mutual caress of two gays, but originally it was struggle for power.

PAEDERASTY SOURCES
As it became known recently, the pederasty gene is not present in the human genome. There is some other factor - prostate gland, allowing the male (and only male) to feel pleasure during anal sex, - in a "setup" position (using scientific language), that is, on all fours. The nature has taken care of that males will not kill each other and the human race will proceeded, - one way or another. The one who has trembled, leaves for a while the group of inseminators, but when leaders perish the abused normally pick up the fallen banner of true men and continue to lead the crazy flock forward.

LINGUISTIC DETAILS
Here we have two citations at once.
“The most widespread synonym the word “vassal" is "ami ","friend”, and even more frequent –“dru”, an ancient word, obviously, of Celtic origin, which also meant "friend", but with a shade of meaning that this friend was chosen, because “dru” was sometimes used for the beloved woman, but never to relatives, as opposed to “ami”.
“When the Provençal poetry began to cultivate courtly love … poets began to use a strange expression for a beloved woman: Bel Senhor, “my fair seigneur”, in a masculine gender as it would be used to for the mister; but we know the fact that such pseudonym was used for one of beauties, Bertrand dе Born”.
So, we see that the seigneur called his vassal as a woman - “dru”.
And the knight called his beloved Bertrand in a masculine gender.
Moreover, if “marriage” is translated as “obtaining of the husband status”, so then how is “homage” (hommage) translated? Thus, there are no other variants, except one: obtaining of the "homo" status, that is, to become a “dru”, that is, a beloved one. So, that is our thoughts are in a muddle, not theirs. At for them it was absolutely clear: at early stages, the one who was above, he was the seigneur, and later on, - the one who was the seigneur, he was above.

FEUD AS FAMILY
The key fact: family relations were similar to the vassal ones. Mark Block writes that seigneurs forced peasants to breastfeed their children. And still there was the right of the first night - coinciding to details with the right of the shaman for defloration. And there was homage when vassals lived with the seigneur in the beginning, and the master was "the old man" (the seigneur, the mister), giving bread (lord), and his companions were his comrades (gazindi), guys (vassi, thegns, knights) and – what is more important - hangers-on (buccellari, hlafoetan).
We see an extremely distinct family-breeding scheme. Within the limits of this scheme Empress Cixi fed ministers from her hand (cache), and Cossacks lived on the common budget (koszt), and within the limits of this scheme “a serf” could become a soldier and take his place among knights - as equal to them. It is not our imagination; it is real historical, legally described reality. There were only two conditions for such shift: "serf" should prove that he was a stand-up guy and to rise to a submission position in relation to the seigneur.

UNIVERSAL CHARACTER OF THE RULES
“The same relations”, - as experienced researchers note, - “existed both on the low and top layers of the society”. Family-feudal relations penetrated all public institutes, both vertically, and across. “If the abbey has a suit in the Royal Court, declares the English feud contract, - the vassal will take his side even against the king”. In the French language there is even a saying specifying a heavy necessity to take a bride to a monastery - for defloration, by the right of the seigneur. Groves and sacred springs, cities and fortresses, money and product taxes belonged not to the Church, as whole, and to its representatives, according to their feudal rights.
The system was total:
- The bishop demanded homage from canons of his Capitulum and from priors of the church district;
- The canons receiving most significant prebends, - from their less rich colleagues;
- Heads of religious assemblages - from the cures of the church parishes related to them.

It is paradoxical, however, the Sacred Inquisition which sent the Templars to the fire for homage, used homage categories itself. For Anglo-Saxon Cynewulf, angels were «thegns» (vassals) of the Lord, and for bishop Eberhard von Bamberg, the Christ was the vassal of the God-father. The same rules of life were also attributed to the Evil One. As researchers point out, the scenes of submission to the Devil represent the best procreations of homage. 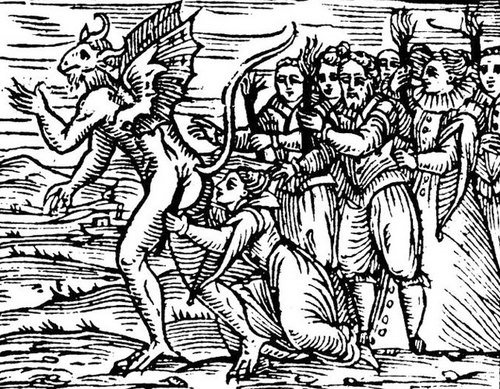 It is clear that the homage procedures touch deep, pre-human psychology layers. The male, passing through this ritual, lowered himself in front of his mister, and the question of rivalry was already out of the question. And that fact that all this ceremonialism is attributed to two leading eschatological forces, - God and Devil, - specifies that the human was still on familiar terms with both these forces.