Louisiana Purchase and the Homestead Act

PURCHASE OF LOUISIANA
Purchase of Louisiana took place in 1803 - at the height of the Napoleonic wars, it gives an idea to assume that the reason of Louisiana transfer was someone's sovereign defaults and satisfaction of some creditors claims. For example, as the friend rodom_iz_tiflis has noticed, France officially received Louisiana "back" from Spain and sold within three weeks. It is very similar to some kind of arrest and sale of property of Spain for debts that is quite typical for "collector" character of Napoleon’s wars.

Let’s have a look the pace of developments.

On May 17, 1792 the New York share exchange was founded, and "the Panic of 1792" started, - the credit expansion of newly generated bank of the United States and impetuous gamble of influential bankers (I do not see the names in the Network).
In 1793, Frenchmen declared war to England and to the Netherlands, the basic creditors of America. In that 1793 the USA started to build up a new federal capital - Washington, District of Columbia, when the lines of credit from Europe had been already overlapped. It is logical that in such situation builders were focused on the attraction of the domestic private capital. By the end of 1793, the association of three main financiers acquired 40 % of building land in Washington.

ROBERT MORRIS
Morris was the main figure at that time. He landed 10 million pounds sterling to George Washington for his war with Britain; it was twice more than the final cost (already with the credit interest) of the total territory of French Louisiana. In 1781, he managed the finance of the USA. As the reward for the money help, he received some lands in the southern states from the government. These lands allowed Morris to create the North American Land Company and to issue shares for 3 million dollars - 15 times less, than he spent for freedom of the USA. There must be not divulged bonuses.

WORK WITH THE CLIENT
Speculative operations lasted for three years. In 1795, the superstructure was created for consolidation of land possession on the basis of the previous gamble - the North American Land Company. Moreover, in 1796 there was an eightfold collapse of the company securities cost. Among victims there were mainly southerners, for example, the family of the future general of Confederation Robert Li suffered much and finally became bankrupt.

PROJECT END
Three financiers got into debt prison, but money disappeared, and then... here I quote.

Morris was released due to acceptance of the first Federal bankruptcy law (on April 4, 1800...) that allowed arresting and selling actives of sellers and brokers who had indebtedness, for repayment of the bankrupt debts.

Judging by the course of events, actives arrests happened among large financiers from southern states co-operating with Morris, - for repayment of the debts created by Morris.

In 1803, the bankruptcy law was not prolonged, and the lands of the French Louisiana passed to the USA. Here it seems reasonable to ask, whether it happened so, what Louisiana was bought for the money collected from cheated Americans? The North American Land Company was engaged in Washington business "as a hobby", and the main money was collected for "the western lands".

THE MATTER PRICE
Morrison's total share value in 1795 was 3 million dollars, and it was initial, obviously low price, aimed at involvement of players. In 1796 of the share price fell eight times, and it means perhaps that the shares total cost was pushed up by the players up to 24 million. It was more than that sum that the USA finally paid to the Barings Bank for the total territory of French Louisiana, and I wonder, in whose hands those 24 million settled.

VICTIMS
Here are the states where the company operated: Georgia, Kentucky, Northern Carolina, Pennsylvania, South Carolina and Virginia - all of them are the southerners. Five of six of these states finally "left in a huff", withdrew from the USA and became a part of the Southern Confederation: Georgia, Kentucky, Northern Carolina, South Carolina and Virginia.

I will give a map bellow. The uninhabited green western lands are bought from France chronologically right after collapse (just for the sum of Louisiana buying) of the habitable red lands, which adjoined the Confederates later and then were forced to annex to the winner. 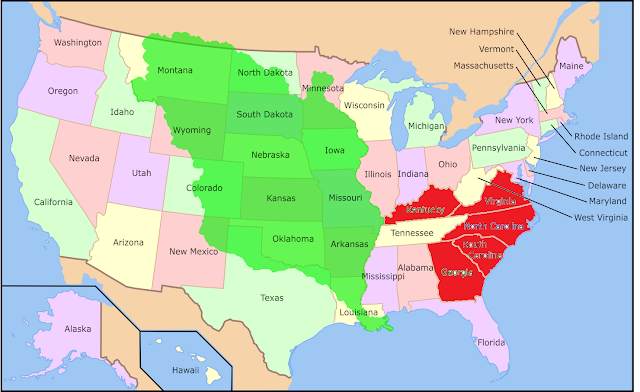 Pennsylvania organized by the Barings Bank, which directly supervised Louisiana purchase and, the main thing, was the headquarters of the North American Land Company which deceived investors, did not join the Confederates. Let’s add to that rather timely Napoleon's invasion into Holland, which gave the Dutch banks the reason not to get involved into that huge land swindle, without invoking the Americans’ suspicion.

WHAT EXACTLY WAS SOLD IN LOUISIANA
De facto Frenchmen did not control Louisiana. In 1803, the left bank of the Mississippi was annexed to the USA, and the right bank belonged to Spain. They mention the fact that in 1802 Spain secretly passed its part to Napoleon, but that transfer was only on paper. In fact, the air was on sale - the right to lands, which none of the participants of the deal controlled.

In such situation, I am inclined to think that the purchase of Louisiana was an exact analogue of Rupert Land purchase sold by the Hudson Bay Company, which never visited those lands. Those documents that the company had was a pure fiction. Both companies both the Hudson Bay and the North American Land – look like, and the main thing, behave as front organizations. The purpose was transfer of budgetary funds in the shadow sector.

MYTHICAL TRANSFERS
I doubt that Napoleon received something from those 15 million. Such "transfer" should solve two issues for the public:

1) the source of Napoleonic wars financing: all looks like so as if money having arrived from the sale of Louisiana, and the wars in Europe were real, though it is clear that France did not have any significant expenses as it was not the aggressor, but the collector.
2) who got 23.2 million dollars out of the state budget of the USA; there was an illusion created as if the USA regularly paid off the credit from the Barings Bank with the interest payments, though the necessary money was available in the USA - following the results of the southern states ruin.

THE HOMESTEAD ACT
Wikipedia: the Homestead Act was free transfer of 600 million acres of the French Louisiana lands to the USA citizens for symbolical cost of 10 dollars per 160 acres. As a result, 285 million acres of land was passed to the USA that, in fact, brought the government 23.2 million out of 17.8 million dollars of formal expenses for purchase of those lands. Interested people were not necessary to wait the stipulated 5 years and could accelerate free execution for 1.25 dollars per one acre.
However, it is not all facts. Exact citations of the Homestead Act contain other formulations: free of charge land acquisition was not mentioned; there were lands for 1.25 dollars for an acre and for 2.5 dollars for an acre. If to pay 1.25 for an acre, 285 million acres would turn into 356 million dollars and if to pay 2.5 - it would be twice more. Investments into Louisiana paid off at least in proportion 1:16.

THE VARIANT WITH BUYING OFF
So-called free distribution concerned only those lands that belong to nobody. In addition, it is necessary to understand that those 24 million dollars stolen from the southerners were quite enough to give necessary 17.8 million dollars of charges to the USA government and to be engaged in the resale process. For Morris who had invested in the USA freedom of 44.6 million dollars, such step would be logical. Historians directly (though without details) point out: since 1804 "the companies (which beside businessmen included members of legislative assemblies and officials of states) appeared which bought up vast areas of land with sale and then selling it in small plots to actual settlers". Well, the documents of this kind usually disappear; I saw in connection with Morris the following formulation "documents are lost because of negligence". Original documents connected with Morris remained in small quantity, documents "attributed to Morris" prevail in the Network.

SHIFT IN 59 YEARS
To my huge regret, I cannot avoid this term. This shift was used to move in time some circumstances (especially financial ones) in the past, and is perfectly well notable in the financial history of Russia. It is observed here as well, and the most important thing is: the lands of French Louisiana got into the government possession in 1803, and were thrown out on the market in 1862 - 59 years later. In 1802-1803 the conflict situation with the southerners reached its apotheosis, but the Civil War began 59 years later. This shift is notable in the legislation as well: Louisiana accepted Napoleon's code in 1870, 67 years later after Napoleon's abandoning his claim for Louisiana, and it should happen around the date of annexing to the USA (1812) - otherwise (having lived 59 years within the limits of the USA legislation system) the French legal tradition was not possible to preserve.

I do not insist that all early history of the USA should be shifted for 59 years in the future, however, it is necessary to shift the financial history: significant circumstances are logically connected with this shift.