About tribute from Russian cities

TRADING STATIONS AND EMPORIAS
Cities of America started with trading stations - protected fenced trading platforms, as a rule, on a river bank, - there lived Europeans in a trading station, outside - the native population. If the place was successful, and the local goods are numerous, the number of warehouses grew, there appeared blacksmith shops, shops for processing of semifinished products, and once the trading station turned into a city.
Russian trading stations developed in Siberia in absolutely the same way. Thus, the Cossack villages grew along the Bitter line and all other lines. Roman emporias developed like that as well - fenced trading platforms protected by small military division on the foreign land. When those trading stations and emporias became cities, they were children of strangers, not natives.

CITIES ON THE FOREIGN LAND
Cities in Turkey, situated mainly on a coastal strip are of Greek origin. At the Black Sea coast of the Caucasus, Crimea and Ukraine there were Greek, Turkish, Hazard, Genoese and Venetian cities. On the old maps of the Caspian Sea, Polish, Georgian and Russian settlements can be found. In the Volga region, there was a whole series of cities of the Golden Horde, culturally alien to the native population. In the Khan Ukraine, there lived Ukrainians and Moldavians in villages, in cities, there were Turks, and so it was across the European part of the Ottoman Empire. Russian merchants founded the city of Jurev in Estonia. The Hanseatic League traded in Novgorod. In Ukraine and in Belarus there were many Polish settlements, in Poland and France – German ones, in Germany - Polish and French ones. In the North Africa, there are many Roman ruins. In East Africa, there are many Indian and Arabian settlements. America is covered with the cities founded by Europeans. Japanese founded cities on the lands of the Ainu, the Chinese - on the lands of the Vietnamese and Burmese. Here we see one general rule: cities were founded by strangers. For this reason, the Golden Bull of Hungary determined all townspeople without any exception as foreigners.

ETNO-HISTORICAL DUALISM
In the first half of 19 century rural population of East Germany were Sorbian Slavs (toponym toponyms are entirely Sorbian), and city population was mainly German. The most important question is whose land it was. As in the critical 19 century, the economy was administered by cities, the territory is considered historically German.
The Egyptian nationalism till 1900 had a clear anti-Arab orientation. The same situation: village was Egyptian, and the Arabian managed the city economy. As a result, Egyptians are generally considered as Arabs.
The same situation developed in Austro-Hungary: the Austrian cities were in the middle of the Slavic lands, and the local Slavic nationalism had a remarkable anti-Austrian orientation. However, as mines, factories and banks were managed in the language of cities, the statehood became Austrian as a result.
In Greece, antique Greek cities were situated in the middle of the Bulgarian population settlements; Bulgarians also took part in the war for freedom of Greece against Turks. Nevertheless, in cities there were Greeks, and the country became Greece.
In Russia, the most vivid example is connected with historically Finno-Ugric regions, in the Moscow Region: the contemporary population looks like Russians, but the story began with the foundation of some Russian cities on the rivers.
Any attempts to present any region as historically monocultural are obviously incorrect; in the past there should be at least two cultures everywhere - rural one and city one, ethnically alien to it.

INTERETHNIC "SYMBIOSIS"
The native goods were in hands of local aristocracy. Therefore, the trade of maple syrup gathering was controlled by Canada Indians, and there was no need to intercept that business. Struggle went there where the margin was collected; it was for the position of the syrup buyer, and the struggle went between strangers on that land. For the buyer the only method to get fixed on that land was to pay a tribute to the locals, which nowadays is called as a rent. In that case, local tribes acted as the power guarantor - there was no possibility for the potential aggressor trying to capture other trading stations to fight with local guerrillas.

ABOUT THE TRIBUTE RUSSIAN FROM CITIES
It is known, the Emperor of the Holy Roman Empire, paid tribute to the Ottoman sultan - for those cities that were on the Ottoman land. The Hanse members paid to the Russian authority. The Genoeses paid to the Crimean Tatars, and the Byzantines and the Rus’ people – to the Khazars. Here again it is necessary to remember that the annalistic Rus’ people, as well as the Byzantines, were strangers in Khazaria; they should pay a rent for the land on which there were their shops. In general, the tribute from Russian cities can mean two variants of calculations:
It is payment of Russian merchants for the rent of the non-Russian land under Russian cities;
It is payment of non-Russian merchants for rent of the Russian land under non-Russian cities.
There are no other variants in the tribal economy.

TRIBUTE OF 14 TRIBES TO KIEV
Fourteen tribes took part in the war with Greeks on the Kiev’s side; however, at first The Ruriks persuaded those 14 tribes to pay tribute to Kiev, instead of the Khazars. The Khaganate had just fallen, and inhabitants of Kiev became the most influential people in the region. However the location of the tribes which were paying tribute the Khazars, were the Kiev, Zhitomir, Gomel, Mogilyov, Vitebsk, Brest, Oryol and Kaluga areas plus Bessarabia. It was not the territory of the Khazaria Khaganate. Here is a question, what did they pay for? The answer emerges, when you analyze, who the Uliches and the Tivertsi were.

WHO WERE THE ULICHES AND THE TIVERTSI
“The Bavarian geographer”, in second half of IX century, specifies that the Uliches had 318 cities and the Tivertsi - 148 cities. Here we see not peasants; but merchants, townspeople. They could pay the Khazars only for land rent under the trading stations in Khazaria. It is clear that when The Ruriks inherited from the Khazars the power in the region, rent payments began to flow to Kiev.

I will result the most courageous map of the Khazaria Khaganate what I have found. All tributaries resubordinated by Kiev (red colour) are either at the periphery, or just outside of the Khazars’ sphere of influence. That is, that tribute was not from peasants - for the right to breathe on that land, but from merchants - for the right to trade on that strange land. Only that way The Ruriks with their 3 (three) cities could connect to their network super-rich Uliches with 318 cities and Tivertsi with 148 cities. 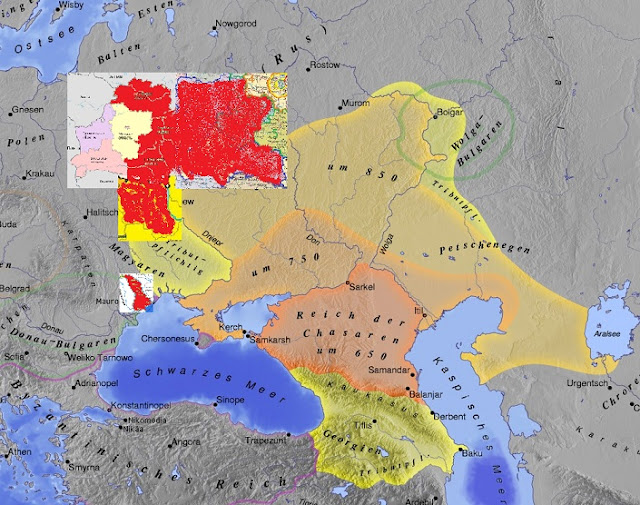 By the way, the Tivertsi settled down in Bessarabia and further in the Eastern Europe, with the centre in the Polish city of Chervyen; and among the Roman emperors (who, as we already know, mostly came from Serbia) there were some Tivertsi. Moreover, pay attention, having started to take the tribute, Kiev never encroached neither on their territories, nor on their authorial power. The conclusion, I repeat once again: tributary relations with cities were not subordination relations; those were rent relations. The Tivertsi and the Uliches leased platforms from the Ruriks for their trading stations at the Black Sea, and sometimes at the Caspian Sea.

TRIBUTE OF MOSCOW TO THE CRIMEAN KHANS
Moscow could pay a tribute to the Crimean khans only for the land rent under Russian trading stations in the sphere of influence of the Crimean Khanate: in Crimea, in Ukraine, in Pryazovia and in the North Caucasus. In particular, the Rus’ people long enough asked, and at times even demanded from The Byzantine Empire to transfer to them the Chersonese. If that transfer took place, and the rent payment (the tribute to the Crimean Tatars) passed from the Byzantine Empire to the Rus’ people. Such tribute is legal and fair. The termination of the tribute payment was most possibly connected with the act relation of the Moscow and Crimean monarchs, - there are evidences concerning such dynastic relations.

ABOUT THE COUNTRIES AND INVASIONS
The ideas about captures of regions by an external aggressor is sometimes influenced by fiction writers. The wars of the past were the wars of trading networks for transport corridors - not for the land. Five percent of the population struggled for the right to take trading profits from 95 % of the population. Even the axiom about the invasion of the South America by the Spaniards and Portuguese is incorrect: the Europeans either founded their trading stations, or captured networks of cities, not less alien for native rural culture than European ones. Nobody was at war with country people. The aim of the capital was trading integration of city and village, and this integration occurred by itself - without any need to capture arable lands and hayfields.

EXAMPLES OF TRADING NETWORKS
A perfect example: the Cossacks on the Amur. Three hundred Cossacks defended facing China the right to control the river, penetrating with its inflows millions hectares of the land occupied by hundreds of small tribes. Nobody was going to capture those tribes; the main river transport artery was the success background of all the rest factors.
So was the Roman Empire: the network of trading stations thrown as a network, on the rivers and seas. So was the Ancient Egypt: a network of Coptic cities specializing in grain export, and delivering architect service as an exchange. So was the Volga Golden Horde – a developed organization, as the excavation have shown, stuffed with high technologies, that is why delivering to locals pig-iron items of complex molding.

DEVELOPMENT VARIANTS
Representatives of trading stations and local land aristocracy are inclined to making relations; it is mutually beneficial. So it happens that 19 century landowners spoke not the same language as their peasants: in Ukraine there were the Polish landowners, in Baltic – the Ostsee Germans; premixing of foreign impurities in village follows the cities’ traces. There is also a return process: in cities, more and more native population appeared, and they sometimes took the power in cities as well.